How is Option Premium calculated when there are multiple trades?

The Options Premium shown under the Funds tab on Kite is the total premium received from shorting/writing options. The Cash margin available is inclusive of this amount, but the breakdown is provided as an option premium.

If you have done multiple trades, the option premium value gets calculated based on the sum of the average price of all the sell orders in the particular contract. Here's an example:

Here is a carried forward long position of 2 lots of “HDFCLIFE21JAN700CE” which was sold the next day, along with which there was also an intraday trade in the same contract. So in total, 4 orders have been executed as per the screenshot below. 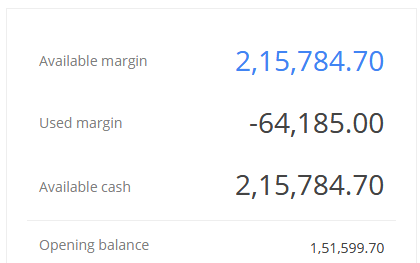 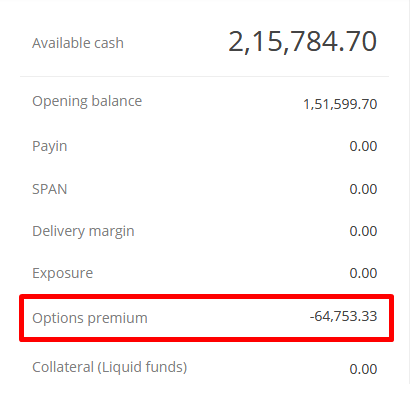 What is the difference between "Used Margin" and "Option Premium" here?

The calculation for Used Margin in this case can be done in two ways:

This is the actual amount credited to your account.

Do note that the minus (-) sign/symbol shown in the Used margin and Option premium is the amount credited, and not amount debited.

The buy average shown on Kite for an open position is calculated based on all the trades done for the day in the particular contract (carried forward/intraday) or scrip.

We see that you have the following ticket(s) open:

If you have the same query, check and update the existing ticket here. In case of a new query, click on Continue.